thanks for checking in... trish is doing well, and i have no doubt she will finish up these next 11 radiation appointments strongly.
Posted by oak at 4:10 PM

Hey Trish and Oak- Glad to hear things are going so well. My mom goes in for a radical (right) and simple (left) tomorrow morning- we are nervous, but you give us strength! I dont know if you can shoot me back an email, but my biggest concern right now is for the lymphodema. I noticed trish had some lymphs removed. How is that affecting her? 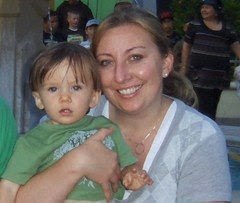